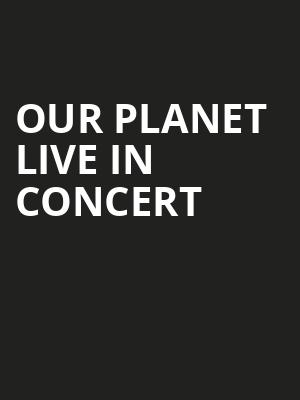 Photo by NASA on Unsplash

Our Planet Live In Concert

The wonders of planet earth laid bare on stage

Why See Our Planet Live In Concert?

The incredible wonders and glory of the natural world take center stage in this thrilling new live-to-screen concert experience, that sees the Emmy award-winning documentary played on a huge screen, accompanied by a full orchestra, conducted by the show's composer Steven Price. With visuals and effects specially curated for this tour, Our Planet Live in Concert promises to be an unmissable event for natural history lovers.

Created by the minds behind some of the stand-out nature documentaries of the past two decades (Blue Planet, Frozen Planet, and Planet Earth) and with narration by the legendary broadcaster and biologist Sir David Attenborough in his inimitable style, Our Planet premiered on the streaming service in 2019, with an estimated 10 million views across the world. Focussing on environments and habitats across the globe, Our Planet not only educates us on the animals and creatures that share our planet but warns against man-made issues that threaten them, making it vital viewing for many.

You may be required to wear a mask during this performance. Please contact the venue directly for more information.

Seen Our Planet Live In Concert? Loved it? Hated it?

Sound good to you? Share this page on social media and let your friends know about Our Planet Live In Concert at First Interstate Center for the Arts.